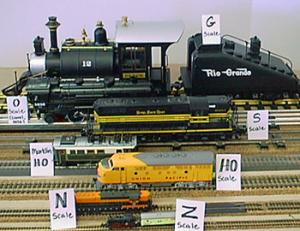 The various model train scales out there are one of the most important things that you need to learn about - it's a huge part of using trains and collecting them. You don't want to have a mish-mash of different scale styles as nothing will go together and you'll be left with a jumbo-lot of different projects.

Instead, you want to be able to fully understand the model train scales that are out there so that when you are buying items, you know exactly what kind of scale you are looking for in the first place. Getting the right scales each time can be very useful, so look out for;

You can build different scenes and projects in different scales, of course, but trying to combine them all into one can look a big strange. You'll be left with a lot of odd shapes and things going on that simply do not match together.

Whilst you can get it to work together effectively in some circumstances, such as if you want to create the idea of perspective, it's typically a very hard thing to pull off and we would recommend sticking with one of the model train scales to begin with.